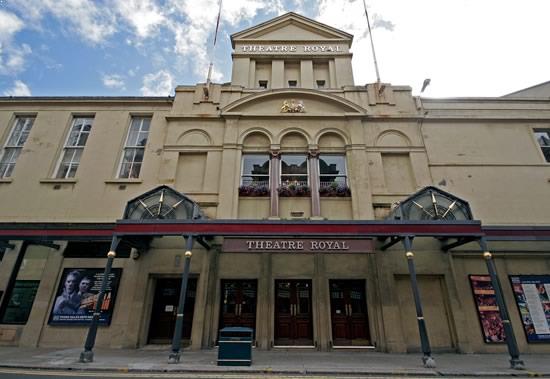 The Theatre Royal, Glasgow has undoubtedly the most colourful and distinguished history of all the theatres in Glasgow, located on one of the oldest theatrical sites in the city. The building first opened in 1865 as a music and concert venue and within two years, it was largely destroyed by fire. When the venue was reconstructed, it was re-branded Bayliss's Royal Colosseum Theatre and Opera House with the main entrance on Cowcaddens Road. A few years later the name was changed again to the Theatre Royal and was acquired by two actors J. B. Howard and F. W. Wyndham who already owned the Royal Lyceum Theatre in Edinburgh.

The Theatre Royal Glasgow was again destroyed by fire in 1879 and following the reconstruction; the main entrance was relocated round the corner into Hope Street where it remains today. The mosaic floor of the main entrance marks the date of 1880 when this reconstruction phase occurred. On March 1st, 1891, the theatre fell victim to a fire for a third time in less than thirty years. The building’s private owners had to raise capital to construct the new theatre, which was completed on September 9th 1865.

In 1895, Sir George Alexander, a distinguished actor of his time, attended the opening ceremony at the Theatre Royal, Glasgow and directed a programme of five plays performed by his London production company which featured Pinero’s new play, The Second’ Mrs. Tanqueray. From the outset, The Theatre Royal has sustained its tradition to offer patrons the finest in every theatrical genre.

Many of the world’s finest theatrical performers have captivated audiences at the Theatre Royal, including Lewis Waller, Maud Allen, the choreographer, great French Actor, Coquelin. A rich plethora of Shakespeare’s plays have been performed at this exclusive theatre, performed by renowned Shakespearian actors, Sir Frank Benson, Henry Baynton and Donald Wolfit. . Even cinema has featured in the Theatre Royal’s entertainment bill with old classics such as ‘The Birth of a Nation’, ‘Hearts of the World’, and later the German ‘Dr. Mabuse’.

Now run by the Ambassador Theatre Group since 2002, The Theatre Royal, Glasgow has always had a special place in the hearts of theatregoers, not only in Glasgow but throughout Scotland. Acoustically it is among the finest in the country and every word spoken or sung on the stage can be heard clearly in all parts of the bell shaped auditorium.