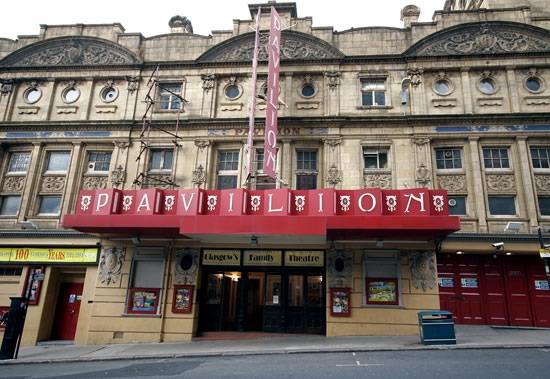 With its strikingly stunning terra cotta façade, The Pavilion Theatre was designed by one of Britain’s renowned theatre architects of the time, Bertie Crewe in 1904. The Pavilion is undoubtedly one of Glasgow’s finest Edwardian Theatres with a capacity of 1800 seats, a lavishly sumptuous interior with exquisite period features adorning this remarkable venue.

The Pavilion has preserved its longstanding tradition as Glasgow’s leading variety theatre, which it regularly purveys to patrons to this day. Remarkably, unlike other theatres in Glasgow, the Glasgow Pavilion receives no subsidies or funding from the Scottish Arts Council National Lottery Fund and other bodies such as local government. The theatre thrives on revenue from ticket sales thanks to customers and staff and owes nothing to the public purse.

Over the course of its 100-year history, The Pavilion has welcomed all of the music hall worthies, including the legendary Florrie Forde. By the interwar period in the late 1920s and throughout the 1930s, the Pavilion’s pantomime tradition was established featuring Harry Gordon and Dave Willis as the mainstays, alternating performances at the Glasgow Pavilion and the Theatre Royal, Edinburgh.

In the 1940s and 1950s, pantomimes were scheduled to run for sixteen weeks and lengthy summer shows were common place, featuring the liked of Tommy Morgan, Tommy Yorke, Jack Anthony and more of Scotland’s pantomime legends of that time. Tommy Morgan enjoyed a cult status at the Pavilion, synonymous with no frills comedy. Following his death in 1961, his ashes were scattered on the Pavilion roof and it is believed that his phantom has haunted the venue since.

Throughout the 1960s and 70s, the hilariously funny summer programmes were emulated and theatregoers were assured to fall of the edge of their seats with the ingenious one liners and infectious humour delivered by local performers such as Jimmy Carr, Lex McLean, Ron Dale amongst others. Another cult following of the time was Jack Milroy with his best performance at the Pavilion’s Diamond Jubilee pantomime in 1964.

A host of other great comedians have sold out shows at the Pavilion, including Glasgow’s great son of comedy, Billy Connolly and English variety comedians such as Freddie Starr, Jimmy Tarbuck, Les Dawson, Bernard Manning amongst others, each delivering their own distinctive comic repertoire. Today, the Pavilion is Glasgow’s bastion of music hall and pantomime traditions, which continues to flourish into the 21st Century. Over the last twenty years, it has showcased a plethora of sell out performances from Sydney Devine to hyponotist Peter Powers. Now over one hundred years old, the theatre is still in fine fettle.