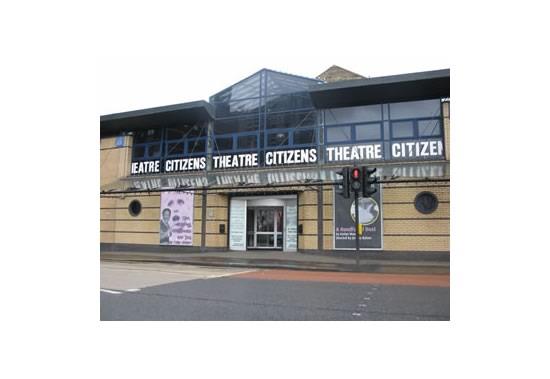 Located at the site of the former Royal Princess Theatre (built in 1878) in Glasgow’s Gorbals district, The Citizens Theatre Company relocated from the Athenaeum in Buchanan Street in 1945 to this Victorian Glasgow Theatre and leased the building for 10 years. Following extensive renovations to the Royal Princess, the theatre company re-branded the theatre to The Citizens and opened the venue with a fresh new look on the 11 September 1945 with JB Priestley’s Johnson Over Jordan as the debut stage performance.

The Citizens Theatre Company was originally founded in 1943 by three Scottish playwrights led by James Bridie. They modelled their values on the old Repertory Theatre, which was dubbed as Glasgow’s own Theatre, a theatre for its citizens. Their core aims and objectives was to make theatre accessible to all members of the community and to produce stage productions that Glaswegians would otherwise have to travel to London’s West End to see.

The Citizen’s Theatre changed hands in July 1969 as Giles Havergal was appointed as Artistic Director of the theatre and Philip Prowse and Robert David MacDonald as his successors. All three men have been involved in directing this leading theatre until 2003 when Havergal and MacDonald retired and Prowse who remained collaborator until 2004. From the outset of they reduced ticket prices and introduced a programme of free previews to every performance staged at the Citizens. This policy was enforced for over thirty years.

As part of urban renewal to the Gorbals Street area in Glasgow’s Southside, The Citizens Theatre underwent an extensive refurbishment programme in 1989 with a new glass panel front, giving a contemporary look and feel and a new atrium foyer which features some of the old fixtures and fittings such as the elephants’ head from the neighbouring Palace Theatre which was demolished in 1977. Subsequently, the Stalls and Circle Studio were reconstructed in 1992 to provide an intimate atmosphere for less renowned and experimental stage productions. Ultimately, The Citizens refurbishment has proved very successful and is a mush loved theatre venue for touring productions. An example of this was Irvine Welsh’s productions of Trainspotting and Filth, which was initially a small studio production prior to its evolvement to the main stage.

The resident Citizens Theatre Production Company peform an extensive repertoire of British and Foreign classics which included translated works by Alegria, Balzac, Cocteau, Goethe, Goldoni, Henkel, Ibsen, Kraus, Racine, Sartre, Strauss and Tolstoy amongst others as well as new plays produced by Robert David MacDonald; Dracula (1972), Camille (1974), Summit Conference (1978), No Orchids for Miss Blandish (1978), A Waste of Time (1980), In Quest of Conscience (1994), Persons Unknown (1995), The Ice House (1998). Since their formation, they have progressed into one of Europe’s leading theatre production companies with 24 world premiers, 22 British premieres and 27 Christmas shows under their belt.

Since the theatre’s overhaul in 1992, The Citizens Theatre houses three auditoriums, the 600 seat Citizens’ Theatre, the Circle Studio seating 120 and the Stalls Studio with a capacity of 60. Today the theatre receives funding from the Scottish Arts Council National Lottery Fund, Glasgow City Council and also receives smaller subsidies from the other local authorities in West Central Scotland. All tickets are reasonably priced for each performance and concessions are given to children, students, registered disabled people and Senior Citizens. There is now a new preview policy – Pay What You Can preview for each stage performance.