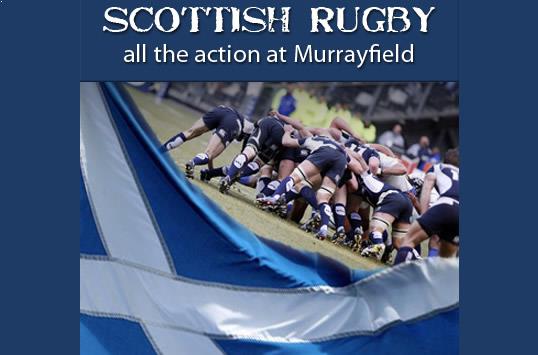 Home to Scottish Rugby Union, Scotland's National Ruby Stadium at Murrayfield was officially operned in 21 March 1925 to an opening match against England. This was a memorable and victorious ocassion for the Scottish Team who won their first-ever 'Grand Slam' title against their archrivals, securing a 14-11 victory, a close call indeed.

Over the sourse of its 70 year history, Murrayfiled has been improved considerably, making it one of the finest national rugby stadiums in the commonwealth. Extensive ground improvements including under soild installation and renewal have took place and the East Stand was completed in 1983, officially opened by HRH Princess Ann prior to a Scotland v BArbarians match on 26 March of that year.

Murrayfield's excellent corporate facilites and ground are used for staging a host of significant events and special occasions. Over the years, The World Pipe Band Championships, Edinburgh Highland Games, Scottish Ladies Hockey and Lacrosse Championships amongst others have entertained thousands at this Edinburgh venue. Many of the world's great music icon have performed open-air stadium concerts at Murrayfield, including The Rolling Stones, Tina Turner, U2 and in recent times, The Live 8 Concert during the 2005 G8 Summit. Murrayfield's corporate facilties are second to none, offering 1925 contemporary, fully equipped function suites and catering. The suites can accommodate upto 1200 dinner guests or 650 conference delegates.

If you have a passion for rugby or visiting Edinburgh for business or pleasure, why not indulge and treat yourself to a behind the scenes tour of Murrayfield Stadium, situated a short bus or taxi ride to the west of Edinburgh City Centre. Discover what it feels like to follow the footsteps of the great icons of the 6 Nations and International Rugby Union, past and present, as you enter the pitch through the players tunnel, the dressing rooms and the step on the famous ground itself. The magnitude of the pitch is awesome and captivates visitors each time. Murrayfield Stadium is home to its own library which houses an extensive collection of Scottish Rugby treasures and a multitude of records of all intrenational matches and Scottish players from 1871. You can discover where a try gets its name from and where Scotland played before 1925.

Murrayfiled is undoubtedly Europe's finest stadiums and has continued to eveolve and sustain development into the 21st century. In future years, a new, larger museum has been planned, which will link up to the existing library and the proposed visitor centre, giving visitors a full expereince of this remarkable 67,500 capacity stadium in years to come.