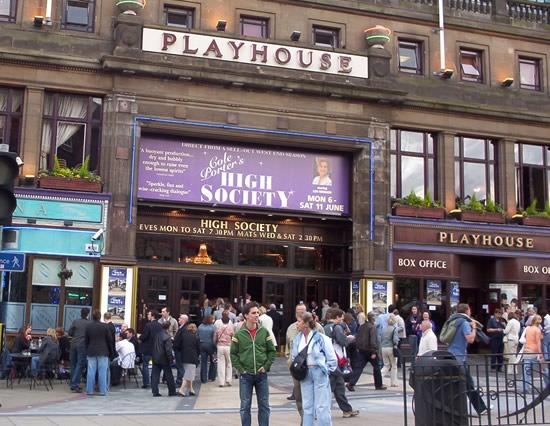 Designed as a variety theatre by Glasgow Architect John Fairweather, The Edinburgh Playhouse is one of the most renowned theatres in Edinburgh, Scotland and the UK. It offers an impressive array of productions and musicals as well as providing a venue to stage events for the Edinburgh International Festival every year.

The Edinburgh Playhouse has had an eventful and colourful history. Owned originally by the Maguire Family, it opened it s doors in 1929 and was primarily used as a cinema for some 40 years. The Playhouse feel victim to a slump in cinema audiences in 1973 leaving a question mark over its future.

Demolition plans were thwarted thanks to 'Save the Playhouse' campaign, which effectively gathered 15,000 signatures against the closure of this remarkable venue. The Playhouse was granted listed building status in 1974 and a year later, the formation of the 'Edinburgh Playhouse Society' was effective in its campaign to transform this venue into one of the most popular theatres in Edinburgh.

The theatre changed hands five times over a short period between the mid 1970s and early 1980s until Apollo Leisure took ownership in December 1985. Over the years, The Edinburgh Playhouse has hosted productions on the scale of 'Les Miserables' and 'Riverdance' and more recently, it played host to the age-old classic ' The King and I' which has proven to be a box office success.

Following and extensive refurbishment programme in 1993, this Edinburgh theatre has returned to its former glory and continues to thrive as one of Britain's leading theatres.

For more information on productions, please consult the events calendar below or alternatively, contact The Edinburgh Playhouse Theatre direct.