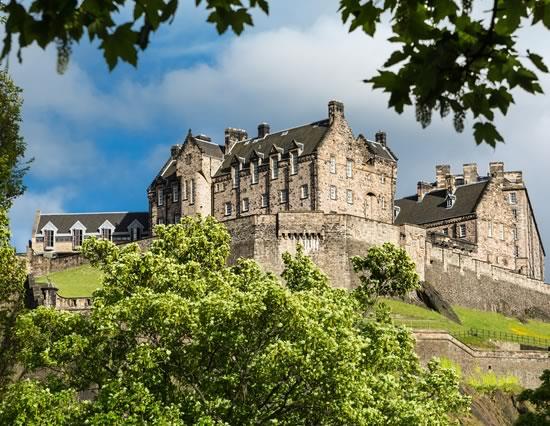 Towering majestically above Central Edinburgh at the top of the Royal Mile, Edinburgh Castle is inarguably Scotland’s national treasure and is monumental to the country’s regal and chequered history. This imposing stronghold fortress was completed around the mid 1000s under the reign of King Malcolm III of Scotland and over its 1000-year history, the castle has been subjected to a series of political uprisings, sieges and bombardments and during Norman times as well as changing ownership between Scotland and England at various junctures of its turbulent history.

In today’s context, Edinburgh Castle retains its status as a powerful symbolic landmark to Scotland’s rich national heritage and has firmly placed itself as the second most visited ancient monument in the UK after the Tower of London, attracting in excess of 1 million visitors annually. As Edinburgh’s premier visitor attraction, the castle is a prerequisite part to Edinburgh’s cultural itinerary and is certainly worth discovering whether you are planning a long or short break.

Instrumental to Edinburgh’s award as a World Heritage Site in 1995 and the jewel in the crown of Historic Scotland’s fine collection of monuments, this awe-inspiring fortress and former royal residence contains a rich plethora of historical and ancient artefacts, exquisite tableaux and of course Scotland’s Crown Jewels, the major attraction to the castle itself. Serving its purpose as former seat of Scotland’s Kings until the unification of Scotland and England in 1707, testimony to Scotland’s Monarchs can be envisaged at the magnificent Royal Apartments, include the Great Hall, now home to a shining display of weapons and armour used in Scottish battles.

Undoubtedly the finest showpiece to Edinburgh Castle’s superb array of attractions is The Crown Room, displaying the three ancient honours of Scotland, The Crown, the Sceptre and the Sword of State. The most ancient of the Crown Jewels is the Sceptre, presented to James V in 1494 by Pope Alexander VI during his coronation.

St. Margaret’s Chapel has a special place in the hearts of many historians and history aficionados and it is by far the most ancient building within the confines of Edinburgh Castle being over 900 years old. This historic chapel has remarkably survived through the more turbulent times of Edinburgh Castle’s history such as the Norman Seiges and bombardments when the castle was completely razed to the ground. Thankfully, St. Margaret’s Chapel was preserved due to its religious importance and is today used for weddings for members of the castle garrison.

Edinburgh Castle and its garrison play an important role to Edinburgh’s civic life as the home of the One O’ Clock Gun, fired from the mighty canons at precisely 1.00pm daily except Sunday. The purpose of the One O’ Clock gun is to allow people to check the accuracy of their own watches and clocks and the closer you are to the castle, the sound of the canon ball never fails to startle, especially first-time visitors to Edinburgh.

During your visit to the Castle, the National War Museum of Scotland is certainly worth exploring and is often regarded as a separate entity from the rest of the castle’s attractions. The Museum’s magnificent collection uncovers Scotland’s role at War from Napoleonic Times up to the Second World War when many Scots were taken as prisoners of war in the Far East Conflict.

To complete the visitor experience at Scotland’s premier ancient monument, visitors have the option to admire the breathtaking panoramic vistas over Edinburgh, the Lothians and beyond around the perimeter of the castle or enjoy a range of delicious lunches and drinks at the café to relax following an in-depth discovery of Scotland’s ancient past. To get the most out of your Edinburgh Castle experience, a range of guided and audio tours are available in six languages and a courtesy vehicle allows disabled visitors to access the castle and its ancient treasures within.